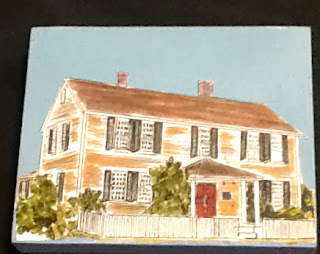 Originally built by Isaac Powers, this house was moved to this site in 1858 from 300 King Street The Tory House was the scene of a confrontation between the Loyalist Rev. Rogers and local patriots. Shots were fired through the front doors, which, with their bullet holes, can be seen at the historical Society on Rogers Street
Posted by Littleton Historical Society at 4:40 PM